Quantum Filmmaking at the National Gallery of Macedonia in June 2015

In the exhibition there will be shown the Quantum project developed during the residency at the Art Colony Galichnik 2014:  Now&Here=Everywhere > Moment 10

Now&Here=Everywhere is the shortest international art collaboration in the History of Humanity, lasting just for 30 seconds, co-creating and re-creating simultaneous moments while celebrating cultural diversity, in which everybody is invited to collaborate with their mobile phones.  The documentary art project invites participants to make a thirty-second film with their smart phones at a certain date and time, and send them back straight away to us via e-mail and WhatsApp, to be published onto the Gallery of Moments of the website.  The collage-moments are randomly generated every time the observers interact with them, collapsing into one of the possibilities co-existing in quantum superposition.

MOMENT 10 was co-created on 15 August 2014 at 2pm (BST) by 35 artists filming simultaneously and choreographically with the camera-phones in different points of the Planet, such as, Japan, New York, North Carolina, Africa, Ireland, UK and Spain, in collaboration with the artists in residence at the Art Colony Galichnik 2014. 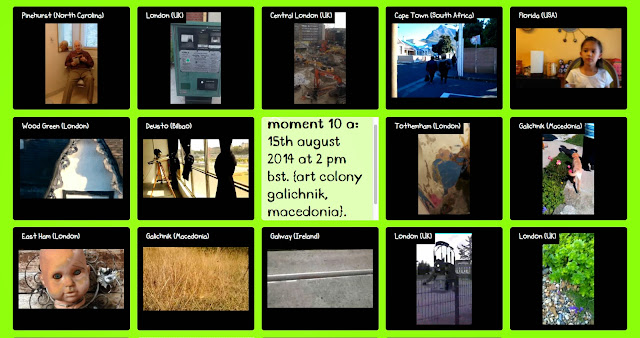 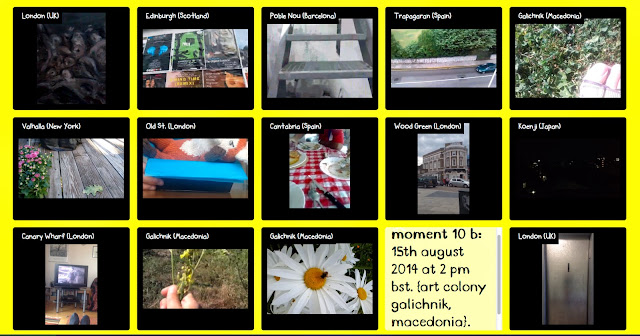 During the residency at the Colony we also co-created X2 for the project Re-constructing the X. The piece re-constructs a pre-dinner momentum with all the points of view of the artists in residence, while registering the cheerful atmosphere of the Colony. The artists performed during the interval of thirty seconds a variety of choreographical camera movements filming each others, and thus, merging the roles of artists, performers and artworks, firstly during the Off line performance, and after, in the online re-constructed multi-perspective scene. All the possible compositions of the video  collage render into one when the collapse button is pressed, transporting the momentum in space and time, in the present tense of the observer: from the past perfect of the Art Colony Galichnik into the past imperfect of other places geographically indeterminate, with the future tense co-existing in superposition, as the possibility that the observers have to collapse the website again, anytime, in their present tense.


Posted by iceberg Fernandez at 01:26

Quantum Film Theory at The Journal of Creative Technologies

The recent development and implementation of multi-directional mobile social media in Post-industrial societies has dissolved the ontological binary opposition between film producers and audiences.  In this context, cinematic narrative as an art form needs to be re-appraised.  The convention is to study the form as a linear method of one-way communication, and an audio-visual semiotic system derived from Linguistics.
This paper is an introduction to Quantum Filmmaking, a new interdisciplinary participatory art practice composed by Kino-Present and Now&Here=Everywhere.  It provides a framework to analyse the Physics of cinematic narrative.  That is, understanding narrative as an artistic process of producing and receiving participatory video-collages created with camera-phones.  It also draws attention to transformations in reality generated during the ON/OFF line cause and effect chain.
This article develops an interdisciplinary theory of Quantum Film, merging subatomic Physics with Expanded Cinema theories.  It explores the under-researched influence of developments in Quantum Physics during the evolution of American avant-gardes in the 1960s and the ontology of Expanded Cinema.  A synthesis of the two is emergent through the practice of Quantum Filmmaking as participatory video-collage produced through mobile social media.
Keywords:  Quantum Filmmaking, Quantum Film Theory, Physics of Narrative, Participatory mobile phone cinema, collage narrative, eutopian discourse.

To read the full article, please, click HERE
Posted by iceberg Fernandez at 09:29